Marxist rule in Bengal has been a long and uninterrupted one for over three and  a half decades. It has unleashed many impulses and synergies.  The good one being the collective bargaining process-that ushered in a heap of essential benefits for the workers and marginalised. That ensured a populist mandate that kept them in power.This was a much needed conduit to dismantle the archaic colonial hierarchial management systems , steeped to the core of all industries, whether plantation or mechanical. A new management structure was the desperate need of the hour- and attacking them systematically ensured the might and power  of the  collective force.With power comes responsibility. Unfortunately, though all workers and marginalised became aware of their rights- there was no checks and balances for executing their responsibilities. The failure to create awareness and build its attendant capacity , witnessed the flight of economical, intellectual and entrepreniual capital of Sonar Bangla-turning her to a skeletal dowager. Trade and traders moved in to fill the void. Bereft of any creative synergy  the economic decline was swift, as the best fled to greener pastures across the border.
The mandate accorded to Mamata Banerjee and Trinamul is a classic support of the historical adage-  Where Theres Life Theres Hope. She is a living example of this adage. Her credentials are a manifestation of her complete belief to her values. She has singlehandedly challenged the formidable Marxist bastion , fearlessly against all odds. She is incorruptible and she cares. THESE INNATE QUALITIES COUPLED WITH HER TOTAL BELIEF IN HERSELF  have prompted the people to give her an unequivocal mandate to rule.
It is a huge ask, and if anyone can surmount the mountains , its her.
Our administration, judiciary and constabulary are all mannned by excellent officers. They need to function apolitically and independently, without any interference from political circles. The three arms are the essential extensions for a healthy, vibrant and progressive community. External  political influences are carcinogen that ultimately leads to chaos and collapse. The million dollar question is will the Trinamul , give them full rein to reinstate law and order , the fundaments for usheing peace and thence investment?
We firmly believe that she will do so. Its a monumental challenge, fraught with the possibilities of  multi-faceted downspirals. This is the critical decision that will usher in the beginning of a new dawn, a renaissance.   The credo of the hour should be - What can we do for the government and not what the government can do for us- hence we have forged alliances with like-minded people to initiate a slew of green projects on that historic day- May13, as an unequivocal supporter. Action speak louder than words- and we are confident that this will prove that we put our money where are mouth is. Thank you the great Gang.
(The Author is one of the most respected Tea planters of the state and is known to have successfully introduced sustainable planting trechniques with a holistic view creating in the process an eco system where the people, the environment and the economic activies co exist in harmony.)
Posted by core4bengal at 13:58 5 comments: 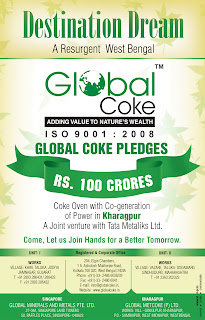 Please ask interested friends to give suggestions as to how we can work towards a resurgent Bengal, proposals for good governance and or specific areas where individuals/ entities wish to contribute.


We will compile and send all inputs to the relevant authorities and highlight the same in our magazine the Core Sector Communiqué (www.corecommunique.com). 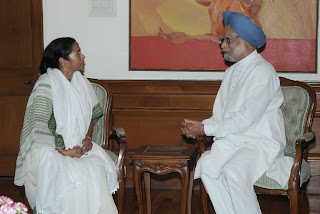 The Union Minister for Railways, Kumari Mamata Banerjee calling on the Prime Minister, Dr. Manmohan Singh, in New Delhi on May 16, 2011.

Email ThisBlogThis!Share to TwitterShare to FacebookShare to Pinterest
Miles to go ...
“The times, they are a-changing”. Even before the exit polls had shown the unmistakable trends, the writing on the wall was clear. The people of West Bengal were ready to give the ruling CPI(M) the boot. The party that had, by hooks or by crook, proved all notions of anti-incumbency wrong, finally had destiny catch up with it.
Even more than a victory for the nation’s stormy petrel Ms. Mamata Banerjee, the mandate will be an overwhelming negative one against the ruling Marxists, who have been blamed for everything – from non performance to nepotism, to unleashing terror on opponents through armed cadres, to systematically destroying the states institutions – be that in the field of education or that in the field of industry. In the end, it was more a slap on the false pride and high handed ways of the CPI(M) than an acceptance of  positive promises of change as put forward by the opposition.
And this is exactly what is scaring many a lover of the state – especially in its industrial circles. Since the blood stained days of the seventies, the state has witnessed only the negative. Capital has taken the flight. The best brains have migrated. Once throbbing industrial sectors have withered and died. No new investment worth its name has come to the state, and the lack of industrial activity has added to the multiplier – of unemployment, poverty, economic stagnation and desperation.
Another thing happened over the last three decades and half – a class of businessmen, close to the ruling elite emerged. A class of traders, who became “self styled” industrialists. One group for example, started by trading in scrap and went on to become sponge iron manufacturers, making supernormal profits under political patronage. The illicit coal trade, controlled by the party provided them with the fuel at a fraction of the market price and the political cover sheltered them from the pollution control officials allowing them to wreck havoc to the environment as they laughed all the way to the bank. The same status quo also gave rise to the dreaded land Mafia who minted millions by bending and breaking laws with impunity.
But these are the small fries. In order to usher in an era of economic progress that will see Bengal wrest its lost glory as an economically advanced state in the forefront of development, she will have to attract the industry back. And for doing this, there can be no better time than now.
The iron and steel industry as we all know is quietly ambling back to its natural habitat. And West Bengal, with its rich legacy in steel making, abundantly available raw material from the neighboring states, skilled manpower, port and its vast hinterland is going to be the ideal location, bang at the heart of the steel belt. The only contentious issue, as I see it, will be the availability of land. Something ,that can be addressed, only by a willing Government, with a popular mandate – and as indications are, Mamata Banerjee is going to fit the bill as a duck takes to water.
One has to keep in mind that fact that the issue of land acquisition is a very sensitive one and the view that we normally take, ensconced in our air-conditioned city comforts, is often far removed from the ground realities. The biggest example is Singur – while we in the city lamented the flight of the Nano, successive elections have shown that an overwhelming part of Bengal thought otherwise. This feeling of the masses will have to be honored as the government goes about acquiring land for the industry. One also has to keep in mind the fact that Bengal is not Gujarat, where barren, fallow land is in abundance for the industry to move in as opposed to almost all available land being of the multiple crop type. Thus, the “right” compensation package has to be worked out and those surrendering their lands will have to be included in the process of development so that its fruits may trickle down to the lowest wrungs.
Speaking of Gujarat, there is another point that needs a mention. One of the biggest problems of the industrial sector here is the abject lack of son of soil entrepreneurs. The cadre raj has systematically destroyed the backbone of the local industrialists, save and except those up country mavericks and mercenaries who owed allegiance to it. We do not have an Adani, leave alone an Ambani who will also bear the state’s interest in mind while stepping on the economic accelerator. Yes, it will not be possible to have an army of local industrialists in the fray overnight, but a beginning has to be made, steps in this direction needs to be taken immediately.
Good governance, single minded devotion to the socio-economic development of the state and a fear-free, corruption less administration. The industry asks no more to locate itself in a state and if West Bengal can offer this modicum, then with all the natural advantages she has, can become one of the most attractive states to invest in and do business.
“But, what about the work culture” asks friends from other parts of the nation? Bengal seems to be in a perpetual lethargic slumber, eternally at denial, unwilling to pick up the gauntlets that fate throws towards her. Well, I for one will not agree, given a chance, we too can burn the candle on both ends. Workers from Bengal are some of the most efficient as we have seen in other parts of the world and here too, with the proper environment and the right incentives, we can and I am sure we will, prove our skeptics wrong.
Your Move Didi. Godspeed.
Posted by core4bengal at 12:49 1 comment:

its time to join hands - to build the bengal of our dreams!

Bengal has blessed Smt. Mamata Banerjee with an overwhelming mandate - and it is time for the state ands to pick up the gauntlet. Let us shed all pessimism and join hands to build the bengal of our dreams.... this forum is not for the naysayers. this is for those who want to do their bit. come tell us what YOU propose to do. We at Core Sector Communique promise to send all your positive responses to the powers that be. Come, let us make up for the lost time.
Posted by core4bengal at 11:17 2 comments:

core4bengal
Kolkata, West Bengal, India
its time to join hands - to build the bengal of our dreams!